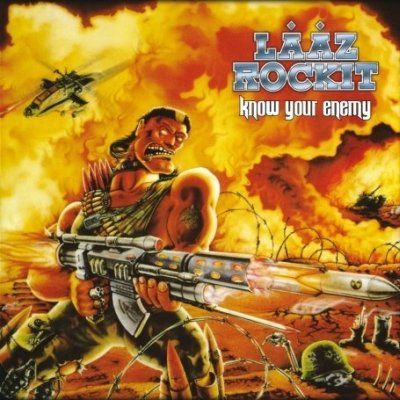 Following the 9/11 attacks, Clear Channel creates a list of "songs with questionable lyrics."

In West Palm Beach, Florida, Rage begin a headlining U.S. tour with special guests Wu-Tang Clan. This form needs Javascript to display, which your browser doesn't support. In This Article:

Rage headlines a bill including Cypress Hill, Quicksand, Mother Tongue, X and Stanford Prison Experi-ment, with guest appearance by the Beastie Boys. Performance at Olympic Park in Seoul, South Korea. With a deep catalog of songs that kick against conformity, groupthink and the legacy of racism, the bands return repeatedly postponed due to the COVID-19 pandemic at this moment seems perfectly poised to take on the stark divisions in a country riven by arguments over what truth even means anymore. Rage perform at Woodstock 99 in Rome, New York. Were going to need them. Rage headline sold-out Anti-Nazi League benefit, Brixton Academy, London, England. "Killing in the Name". The video combines live performance footage with scenes from 1992 documentary Incident At Oglala and text from Peter Matthiessen's In The Spirit Of Crazy Horse. "Tire Me"(First time live since 2008) "On the strength of the album, they must be viewed as one of the most original and virtuosic new rock bands in the nation" Timothy White, Billboard. Sign up for our newsletter. First of two shows on the second stage of Lollapalooza II, Irvine Meadows, Los Angeles, California. "No Shelter," Rage's track on the platinum Godzilla soundtrack, is nominated for Best Metal Performance in the 40th Annual GRAMMY Awards.

"Bulls on Parade" 2022 Rolling Stone, LLC. The home video comes with a bonus CD single: a new Rage studio recording of Bruce Springsteen's "The Ghost of Tom Joad.". Also appearing: Beastie Boys, Smashing Pumpkins, Fugees, Red Hot Chili Peppers, John Lee Hooker, Beck, Sonic Youth, Yoko Ono, De La Soul, Richie Havens. All Rights Reserved. "Sleep Now in the Fire" First European tour begins, supporting Suicidal Tendencies (through 10/24/1992). Rage headline the Coachella Festival in Indio, California. Of course, the overjoyed fans lucky enough to be in the audience at the historic event had to capture the moment for posterity. According to Rolling Stone, the show kicked off in a typically raucous fashion for the band whose patented blend of rap, rock, metal and street-level reportage have kept them at arena-level headlining status despite two extended hiatuses since their 2000 split. "People Of The Sun," from 'Evil Empire,' is nominated for Best Hard Rock Performance in the 39th Annual GRAMMY Awards. "People of the Sun" 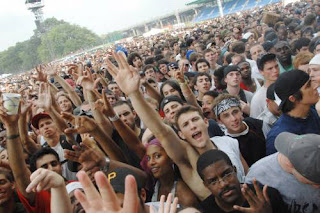 (2) 'Evil Empire' is certified platinum for U.S. sales of more than 1 million copies. Rage's net earnings from these performances are donated to a group of activist organizations, including Friends & Family of Mumia Abu-Jamal; FAIR (Fairness and Accuracy In Reporting); the National Commission for Democracy in Mexico; FZLN (Zapatista Front For National liberation); and Women Alive. Also appearing: Screaming Trees, Eddie Vedder, Mary's Danish, 7 Year Bitch, Green Apple Quick Step, Exene Cervenka. Rage return to Los Angeles for their first U.S. show in two years, raising $300,000 to benefit Arizona organizations fighting the SB1070 immigration law. Recording of 'The Battle of Los Angeles' begins (completed 10/01/1998). The band plays a concert in The Netherlands. 'Renegades' hits the streets as a collection of songs originally written and recorded by artists such as MC5, The Stooges, EPMD, Bob Dylan, Minor Threat, The Rolling Stones, Afrika Bambaataa, Devo, Volume 10, Erik B and Rakim, and Cypress Hill. Rage Against the Machine had a weird habit of only existing when Americans were least open to their revolutionary message. 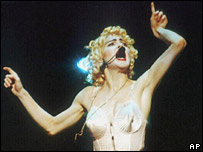 MTV "120 Minutes" premier of "Freedom" video, directed by Peter Christopherson. Rage play the Tibetan Freedom Concert, Golden Gate Park, San Francisco. The original plan was to start at a small arena near the border in El Paso, Texas, but they wound up kicking things off at Alpine Valley Music Theater in East Troy, Wisconsin, which holds 37,000 people and appeared to be pretty near capacity. At Wisconsin tour kickoff, Rage proved that they dont need new songs to speak to this exact moment in American history. "Know Your Enemy" 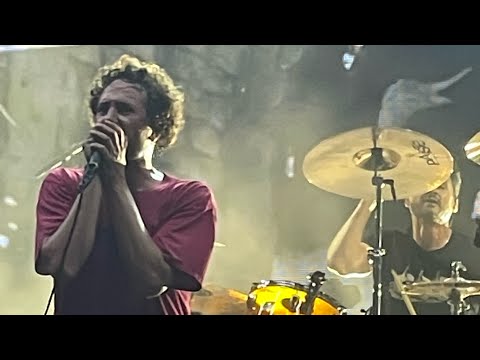 It features new Rage track, "Year Of Tha Boomer-ang," which is later included on 'Evil Empire.'. RATM has the distinction of being the only band to have all its songs on the list. Also appearing are Black Star, Bad Religion and the Beastie Boys. The Single from "Renegades", "Renegades of Funk," begins radio airplay. It finally happened. The magazine reported that the set kicked off with 1992s Bombtrack during which the words Fear is Your Only God flashed on the screen behind them followed by such ground-shaking classics as People of the Sun and Bulls on Parade.. Their initial run of 1991 to 2000 tracked almost perfectly with the post-Cold War/pre-9/11 period when Bill Clinton was president, the economy was booming, and the gradual right-wing tilt of the country was invisible to most Americans.

"The Ghost of Tom Joad" (Bruce Springsteencover)(First time live since 2000) The album also certified platinum in Canada, U.K., France, Belgium, and Chile; 2x platinum in New Zealand; and gold in Germany, Denmark, Holland, Norway, Sweden, Switzerland, Australia. Check out some of their videos and photos above and below, and see the full setlist, courtesy of setlist.fm. Cypress Hill, Ligher Shade Of Brown, Fobia, Little Joe Y La Familia, and Thee Midnighters share the bill. They came back at the dawn of the Obama era during a brief moment of optimism and last played four years before Trump came down the escalator and kicked off his presidential run. "Wake Up" Rage play Scotland's T in the Park and the Oxegen Festival in Ireland. Rage play "Latinpalooza," a joint benefit for Leonard Peltier Defense Fund, United Farm Workers, and Para Los Nios, at Grand Olympic Grounds, Los Angeles, California. Rage play free concert at the Velodrome at California State University, Dominguez Hills, California. The show also included the band running through a cover of Bruce Springsteens The Ghost of Tom Joad, which they hadnt played since their original final swing of dates in 2000, as well as such fan-favorites as Killing in the Name, Bullet in the Head, Know Your Enemy, Testify, Guerrilla Radio, Sleep Now in the Fire and War Within a Breath. The gig was the bands first live performance since LA Rising on July 30, 2011; the next show on their Public Announcement Tour will take place Monday (July 11) night at the United Center in Chicago.